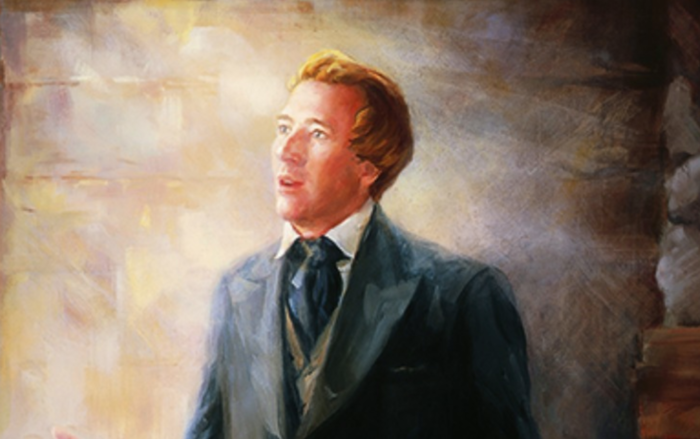 A few years ago, during the summer months as I was preparing to teach the Old Testament for early morning seminary, I happened across a podcast that was a beginner’s guide to the Old Testament. The podcast is called Discovering the Old Testament by Sheldon Greaves. It has since become one of my favorite beginner podcasts and one that I suggest for anyone wanting to get a good sampling of Old Testament studies. Each episode is short (only approx. 20 minutes in length) and Greaves keeps the conversation rolling along in his rather hypnotic voice. He has a way of going just deep enough to make a newcomer feel a little lost at sea before returning to more familiar waters.

Throughout the first few episodes, Greaves describes the Old Testament concept of “covenant making” and how this idea is perhaps strange or new to most Christian listeners. As a Latter-day Saint I smiled because I don’t know if I’ve ever been to Church where the word “covenant” wasn’t used at least once. We are very much a covenant-oriented people. We make covenants, live up to our covenants, and “walk the covenant path.” The idea of covenants may be a new(ish) concept for many Christians, but for Latter-day Saints it’s just another day at Church.

After only a couple minutes into first listening to Episode 8: Abraham’s Covenant, I immediately made a connection that I had never seen before between Section 1 of the Doctrine and Covenants and relatively recent scholastic discoveries of ancient patterns of covenant/treaty making.

As Greaves explained, in the 1950s there was a well-known scholar by the name of George Mendenhall (1916-2016) who was studying international treatises originating from Mari, Syria. Through this study, Mendenhall identified a formal legal pattern for how ancient Egyptian and Hittite covenants/treaties were constructed. He then turned his attention to the Old Testament text and discovered that the same pattern of covenant/treaty making were exampled throughout that text as well. Dr. Mendenhall published his findings in his book Law and Covenant in Israel and the Ancient Near East.

Roughly stated, Greaves details 6 basic elements that Mendenhall found in what constituted what is known as the “Treaty Covenant.”

As I applied this list to Section 1, I couldn’t help but see every single last provision explicitly detailed within it. This alone is pretty remarkable, but what adds more to this is the context of how Section 1 came to Joseph Smith. The following is an excerpt from the Church’s new historical narrative Saints 1815-1846: The Standard of Truth (available to read on the LDS Tools app):

A few days later, on November 1, 1831, Joseph called a council of Church leaders together. Ezra Booth had recently published a letter in a local newspaper accusing Joseph of making false prophecies and hiding his revelations from the public. The letter was widely read, and many people had begun to grow wary of the Saints and their message.

Many Saints also wanted to read the Lord’s word themselves. Since there were only handwritten copies of the revelations Joseph had received, they were not well known among most church members. Elders who wanted to use them in missionary work had to copy them by hand.

Knowing this, Joseph proposed publishing the revelations in a book. He was confident that such a book would help missionaries share the Lord’s word more easily and provide correct information about the Church to curious neighbors.

The council talked the matter over for hours. David Whitmer and a few others opposed publishing the revelations, worried that making the Lord’s plans for Zion more public might cause problems for the Saints in Jackson County. Joseph and Sidney disagreed, insisting that the Lord wanted the church to publish His words.

After more debate, the council agreed to publish ten thousand copies of the revelations as the Book of Commandments. They assigned Sidney [Rigdon], Oliver [Cowdery], and William McLellin to write a preface to the book of revelations and present it to them later that day.

The three men began writing immediately, but when they returned with a preface, the council was unhappy with it. They read it over, picking it apart line by line, and asked Joseph to seek the Lord’s will on it. Joseph prayed, and the Lord revealed a new preface for the book. Sidney recorded His words as Joseph spoke them.

In the new preface, the Lord commanded all people to hearken to His voice. He declared that He had given Joseph these commandments to help His children increase their faith, trust in Him, and receive and proclaim the fullness of His gospel and everlasting covenant. He also addressed the fears of those like David who worried about the content of the revelations…

After Joseph spoke the words of the preface, several members of the council said they were willing to testify of the truth of the revelations. Others in the room were still reluctant to publish the revelations in their current form. They knew Joseph was a prophet, and they knew the revelations were true, but they were embarrassed that the word of the Lord had come to them filtered through Joseph’s limited vocabulary and weak grammar.

If the man selected for the task was unable to do it, everyone in the room would know and be responsible to testify that the Lord’s revelations to Joseph were true, despite their imperfections.

Taking up a pen, William tried to write a revelation, confident in his mastery of language. When he finished, though, he and the other men in the room knew what he had written had not come from the Lord. They admitted their error and signed a statement testifying that the revelations had been given to the prophet by the inspiration of God.

In council, they resolved that Joseph should review the revelations and “correct those errors or mistakes which he may discover by the Holy Ghost.”

In this amazing history we can find much to talk about, but the emphasis here is that (1) modern men tried to write a preface to the Book of Commandments and failed, (2) Joseph Smith received a revelation from the Lord constituting the necessary elements of the preface and the Book of Commandments, (3) that the revelations that came through Joseph had his fingerprint on them and were “filtered through Joseph’s limited vocabulary,” and that (4) no other men could write follow up revelations that were more eloquent, Joseph’s seemingly embarrassing “filter” notwithstanding.

In Section 1, we find evidence for every one of the six elements of ancient covenants/treaties. My own list herein I offer only as a preliminary guide and I, by no means, make no assertions that it is even remotely comprehensive, but here are a few things I have found. I have italicized the elements that stood out to me.

Part 1 — The Preamble: Who’s who in the covenant/treaty?

Part 2 — The history between the parties involved and the reason for the covenant:

Part 5 — A list of witnesses and agents to the covenant/treaty:

There is certainly a lot of crossover between verses, and some verses can serve in various roles and purposes, but it is fascinating to see just how consistent Section 1 is to the ancient legal pattern of covenant/treaty making.

In Latter-day Peace Studies’ Come, Follow Me podcast (Episode 32: Doctrine and Covenants 1), Ben Petersen and I talked at some length about this very subject and the covenant/treaty parallels. Since then, Riley Risto (from our Latter-day Contemplation podcast) sent me a link to the Church website of an article from 1980 entitled “A Covenant People: Old Testament Light on Modern Covenants,” by David J. Whittaker.

In his article, Whittaker introduces a seventh legal pattern that Mendenhall discovered in ancient covenant/treaty making that Greaves had left out of his podcast. That seventh pattern is a type of Ratification Ceremony where there would be a ratification event that would “seal” the covenant and make it binding. Whittaker offers suggestions that this event or “ceremony” could be “a meal together, sharing a drink from a common cup, using blood or salt symbolically or actually, giving the vassal a new name, or slaughtering an animal representing the vassal and cutting the carcass in pieces.”

I was intrigued that there was a seventh pattern beyond the six that Greaves had mentioned, so I went back to Section 1 to see whether there was mention of the “sealing” of the covenants. Interestingly enough, verses 8 and 9 speak of times and events coming when these covenants and commandments will be sealed:

And verily I say unto you, that they who go forth, bearing these tidings unto the inhabitants of the earth, to them is power given to seal both on earth and in heaven, the unbelieving and rebellious. Yea, verily, to seal them up unto the day when the wrath of God shall be poured out upon the wicked without measure.

It is absolutely fascinating when we get those moments of discovery in our lives to see how subtly consistent the Lord is throughout time. While there are many instances when Joseph could have known ancient nuances, it is completely improbable that he was able to produce the amount of consistent nuances that he did on a regular basis. When three other men failed to produce a preface, he received a preface from the Lord that was entirely consistent with ancient covenant/treaty patterns.

Shiloh lives in Bakersfield, CA, with his wife and four children. He spent his formative years growing up in Memphis, TN, and graduated from Brigham Young University with dual degrees in philosophy and geography. Shiloh is currently a graduate student at Claremont Graduate University pursuing a PhD in religion (focusing on Mormon Studies). He is the founder of Latter-day Peace Studies and co-produces LDPS Come, Follow Me's weekly podcast.